(Note: Pam and I met Ashley in 2008 at the John W. Jung Memorial reception at UW-Madison. Ashley was one of the new freshman students being considered to receive the JWJ scholarship. Our interaction with Ashley reminds us of how quickly life can change. It also reminds us of the dangers of addictions and the ramifications that those under the influence of a substance can have on innocent victims. Ashley’s spirit motivates us, and hopefully you as well, that a person’s perseverance and a will to fight can take a tragedy and turn it into something that can help encourage others as all of us walk through difficult times in life. Here is her story. )

One day can change your life; one action can shape your future and change all your dreams. This is the story of my one day:

I had less than a month left before I went to college, and already it didn’t seem like there was enough time to get everything done that I wanted, but one thing I could do was spend as much time with my friends as possible. Because of this, I took advantage of every new movie out in theaters and every free moment that I had. July 22, 2008 this advantage involved going to Mamma Mia! with one of my closest friends Amy, who I wouldn’t be able to see when I finally left for college.

Everything was going according to plan. After work I went to meet Amy at the theaters where we bought tons of junk food and watched the best musical ever, Mamma Mia!. Unfortunately, through miscommunication, my parents didn’t realize where I was and demanded that I come straight home after the movie. Through fear of being reprimanded, I dragged Amy back to my house with me so I could use her as a shield.

Luckily, everyone was asleep when we got there, but that didn’t mean I wanted to stay, I had too much pent-up energy, so Amy okayed that I sleep over at her house and I packed up my things, left some notes, and went over to Amy’s. When we got there, because her parents were also sleeping, we stayed in the garage and talked about what our next activity was going to be.

At this time, I got a phone call from a friend in Oshkosh. When informing him of our predicament, he suggested that we played Frisbee golf in the dark. It didn’t take long to convince Amy of this plan and soon enough we were on the road heading to our first game of night Frisbee golf.

The following are only vague memories from the next three days:

I know that while in the car to Oshkosh we stopped at the BP on the corner of 76 and 41 where Amy gassed up and bought an energy drink.

I think that I pointed out Snell Street to Amy as we passed because I had once held volleyball practices down that road.

I held my friend’s hand in the hospital who I was heading to visit in Oshkosh.

I looked at some people from high school and said ‘This is why you don’t drink and drive’ but I don’t remember who.

Over 72 hours and this is all I can remember. 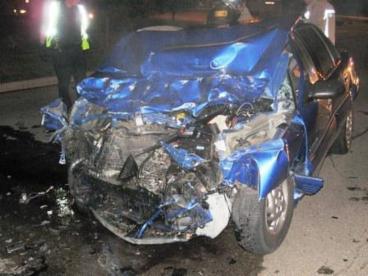 On the corner of Packer and Jackson Streets in Oshkosh, a Jeep Grand Cherokee hit a Pontiac Grand Am head on. The following is a list of the injuries obtained by all parties in the vehicle:

Driver of the Jeep Grand Cherokee:

· Able to stand outside of the vehicle

· Determined to be drunk at the scene

o Later on it was determined that the BAC was .15

Driver of the Pontiac Grand Am:

Passenger of the Pontiac Grand Am:

· Also needed to be pulled out of the vehicle and spent 16 days in the hospital including a time of intense physical therapy.

· It was determined that if there was an airbag, it was not deployed 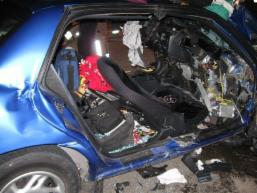 I was the passenger. I had to enter into my freshman year of college in a wheelchair, trying to maneuver the hills of Madison. I spend a month in a wheelchair and a month on crutches while on campus which hindered my ability to meet people and participate in social activities.
As of February 3, 2009 I am still unable to run for almost a year yet, I still have pain in my shoulder (where the metal plates broke), in both knees, and in the break in my PCL. I am just now starting work again and I am just making a network of friends on campus in which I can rely. Six months later, and my life is nowhere near what I had intended on it being, or what it was before. I have watched many plans fall through because of my physical state, but it’s getting better. 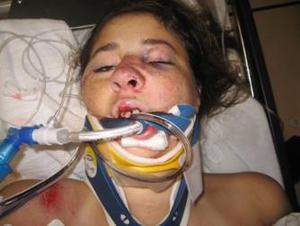 “One day changed my life.One decision to get behind the wheel and drive drunk changed all of my plans for the future and made an already difficult time in life almost unbearable.”--Ashley